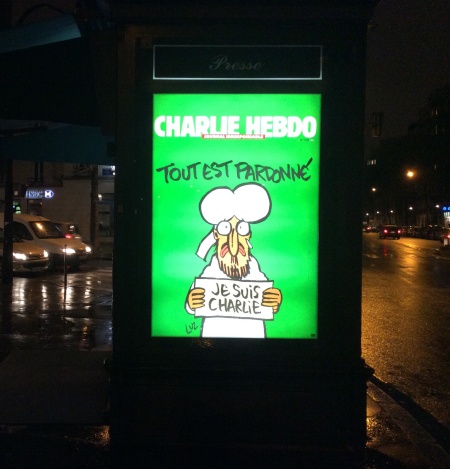 O.M-R. – The events are still close and yet rivers of ink have already flowed about the January 7 attack against the magazine Charlie Hebdo. We probably need more perspective, but still have the urge to position ourselves before the events in a sensible and sensitive manner, consistent with our values, while we try unpacking the jumble of concepts and arguments circulating in the media and networks. For those of us who have lived in cities where there have been terrorist attacks – New York, Madrid and London, and now Paris – and were able to attend the republican march of January 11, the initial feelings of fear and confusion were followed by the powerful sentiment of participating in a massive, diverse, peaceful reaction (perhaps unprecedented) in the midst of a time of crisis and political disaffection. For logistical and urban design reasons, it is hard to imagine that the Paris march could have taken place in any of the other three cities.

The first concept that has been put on the table these days is that of freedom of expression. Many understand the attack on Charlie Hebdo as an attack on the right to free speech, which is essential in a democracy. As with every right, comes the question of where its boundary lies. Many intellectuals, especially in the English-speaking world, have appealed to a responsible and mature use of it. They suggest, more or less explicitly, that the editorial staff of Charlie Hebdo may have acted irresponsibly by publishing drawings that they knew might offend the sensibilities of members of a group, the Muslim community, which currently suffers signs of misunderstanding and rejection in Western societies, and is therefore at a disadvantage.

Moreover, as some explain, the concept of satire has historically been interpreted as that of exercising mockery against the powerful and in support of the weak, and not the other way around. Some go further and brand Charlie Hebdo as Islamophobic and Orientalist, that is, of reinforcing a Manichean worldview between the West and the East that encourages racial hatred. Several members of the editorial board have defended the magazine from these allegations, both before and after the attack. Alternative covers and drawings of the magazine have circulated, showing that Charlie Hebdo’s laicist poignancy has all beliefs and ideologies as a target. In fact, only a rigorous examination of the contents of its pages over time would allow a truly informed debate about its editorial line. Without such work of research and dissemination, which corresponds in the first instance to academics and intellectuals, but also the media, many will continue judging the satirical magazine in the same biased way as the terrorists, and interpret what we are experiencing from this arguably limited perception.

Yet shedding light on the editorial line of Charlie Hebdo will not answer the question about what is the limit to freedom of expression and what is the role of satire. The actual content of our democratic rights and freedoms is in constant negotiation, and reflects the concerns and needs of each society and the moment it is living. In this regard, it is important to recall that France is a «laic» or secular republic, where the role of the State is to ensure that religious organisations do not influence political and administrative power, and where the crime of blasphemy is not recognized as such. In any case, it is clear that respect for others, tolerance of ideas and opinions contrary to mine, are a prerequisite to any constructive negotiation of the real and changing content of our rights and freedoms.

Tolerance is another of the most repeated concepts over the past days, and probably one of the most difficult to put into practice. To see, hear or read things we dislike, or that we feel offend our innermost beliefs, is a huge challenge for anyone. One that requires large doses of generosity and trust in oneself and mankind. Tolerance is something that is internalized, and to a large extent through repeated exposure to what initially contradicts or offends us. Any society with a rooted Catholic tradition and a strong historical presence of the Church, for example Spain, knows this. Who would be shocked today in Spain by a caricature of God, Christ or the Holy Spirit in a satirical magazine? Very few.  But it is not that long ago that such a caricature would have been almost unthinkable, and the consequences of circulating it in public fatal, for both its authors and readers.

The repeated employment of satire – intelligent humor, “militant irony” – ends humanizing any belief or ideology, even the most dogmatic. Its practice is something that all societies should aspire to as part of the democratic ideal. Many journalists and cartoonists in other parts of the world who work under threat, and do not enjoy the protection of the State in the practice of their profession, have sympathized with their French colleagues – they would give a great deal to write and publish in a society like this. The impact of seeing that even in a privileged country such as France, with a longstanding democratic and enlightened tradition, one risks one’s life for publishing certain cartoons has been enormous. This also explains the international citizenry’s strong reaction to the attack, one which, according to some, has been disproportionate in relation to the response to other more devastating jihadist attacks in other parts of the world.

We have an historic opportunity to discuss these concepts and convey to our political leaders how we want them to be interpreted and applied in our increasingly complex and globalized societies in order to avoid more tragedies like this one. And as is often pointed out, to avoid that the jihadist threat is used for the purpose of restricting these same rights and freedoms in the name of national and international security, and justifying military interventions in particular countries. The challenge is immense and tests us as citizens, starting with our daily lives, in our encounters and exchanges with those who live and think, or just dress, differently from us.

Over the past days the atmosphere in Paris has generally been friendlier than usual. This spirit of tolerance and peaceful coexistence was strongly expressed in the march of 11 January, and permeated the French political class, which has shown remarkable unity in the face of the attack. May this spirit last beyond the time of homage and mourning, and subsequent media attention. And may it transcend borders. Meanwhile, newsstands in Paris display posters with the cover of the first issue of Charlie Hebdo after the terrorist attack, showing a bearded man with a turban, a tear in the eye, holding a sign of «Je suis Charlie» (I am Charlie) under a text that says «Tout est pardonné» (All is forgiven). It is a mixture of irreverence and tenderness which has not pleased everyone, but reflects the spirit of Charlie Hebdo and the absence of resentment as an essential requirement to continue living and laughing.

This article was originally written in Spanish, and has been adapted and translated into English by the author. See post. A shorter version of the original article appeared in the op-ed section of El Correo (printed edition) on 22 January 2015.